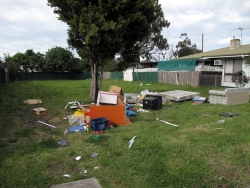 Australia’s endless debate about property prices pivots on the balance of supply and demand.

Earthsharing’s Speculative Vacancies in Melbourne 2010 Report demonstrates that nearly five percent of all houses in Melbourne are simply empty and unused.

The report identifies and measures the scale and extent of speculative vacancies – properties held out of use in the pursuit of capital gains – using water meter data collated by the various utilities.

“The REIV consistently points to it’s Rental Vacancy rate of 1.7 per cent as the sole measure of vacancies in Melbourne,” Earthsharing Research Director Karl Fitzgerald said today at the release of the report. “Our survey shows one in twenty houses and apartments are just sitting there vacant.

“Recent increases in house prices have been driven by speculation, not a housing shortage. Property owners are restricting the supply of housing by holding properties off the rental market.

“More than 20 suburbs surveyed had estimated vacancy rates in excess of 8 per cent. There are notable hot spots in Docklands, Williams Landing, East Melbourne and Truganina,” Fitzgerald said.

“Supply and demand in these suburbs is significantly mismatched and should be monitored carefully for distress as housing prices recede.

“Docklands (23.3 per cent vacant) is particularly interesting as builders there have been obliged for some years by their financiers to offset risk by pre-selling a very substantial proportion of apartment before commencing construction. The vacancies there are largely owned by individuals, many of whom paid a very small deposit and signed a water-tight contract obliging them to pay the remainder on completion. These contracts are coming due just as the price trend turns down decisively,” Fitzgerald concluded.